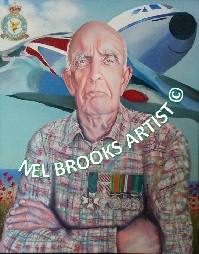 Jacko was a flying instructor for the RAF in Canada during the second world war. In 1944 he returned to England and spent time in Bomber Command flying Mosquitos before becoming a test pilot for the Andover XS790 - - Britain's first jets.

Jacko then went on to fly the new XK699 Comet> as part of the 216 Squadron on the Queen's Flight (transporting the Royal Family). Between 1956-1958 was based at RAF Lyneham, when he was awarded the LVO.

The cockpit of Jacko's Comet aeroplane is on display at Old Sarum Airfield.