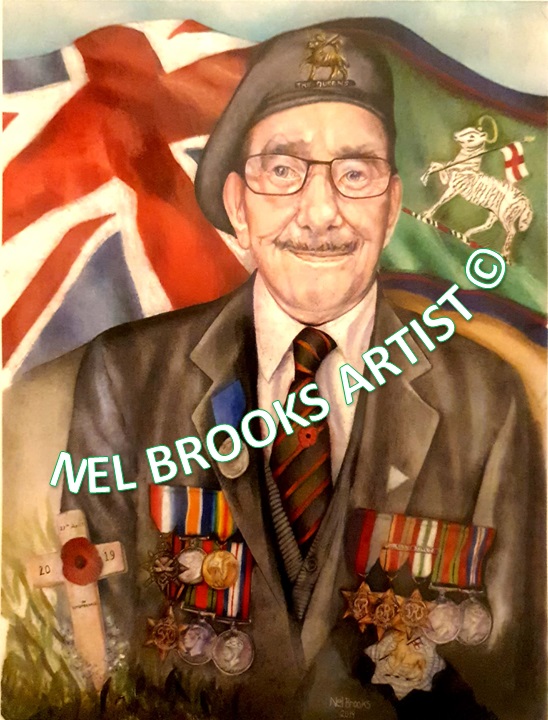 Ted came from Sunderland and initially wanted to join his local regiment, the Durham Light Infantry. After voluntarily enlisting in July 1939, he was sent to the Bedforshire and Hertfordshire Regiment, serving with them from February 1940 in Northern France and during the subsequent disastrous campaign, eventually being evacuated from Cherbourg. After recovery back in the UK, he was sent as reinforcement to the 2nd / 5th Queens, then in Cumberland.

After two years with the Battalion in the UK, he too made the long journey with 169 (Queen's) Brigade from the UK to Libya via Iraq. By now a Corporal, Ted also fought at Enfidaville before preparing for the Salerno operation. He was then promoted again to a Platoon Sergeant in D Company. During the crossing to Salerno, Ted was suffering with diphtheria and a very high temperature but, despite being given the opportunity to stand down, he refused and went ashore with his platoon. Ted was with his company during the early hours of D+1 when the battalion was engaged in another furious battle with German armour near Montecorvino airfield.

To his dying day, Ted wanted his experience relayed in which Ted's Commanding Officer, Captain Fevez, was shot right above Ted during the ensuing battle against a Panzer Division with no artillery backup.

This meant that Ted immediately took command of the Platoon. However, without his authorisation, a stretcher bearer standing behind him began waving a white flag to surrender, rather than fight on to the death, as Ted would have done. Ted and his remaining men were then taken prisoner and remained POWs until the end of the war.

Ted's drawing depicts the death of Captain Fevez and his men's capture by the Germans. An experience that stayed with Ted until his dying day.

Sadly, Ted died on the day I completed his portrait. He did, however, get to see it and was, apparently, very happy with the result.