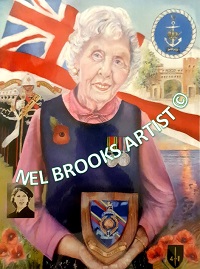 Marion's mother and Aunt (who were twins) both served in the WRNS, which was first established in WW1 in 1917, before being disbanded in 1919. It was then revived in 1939, at the beginning of WW2.

Marion joined the WRNS at the age of 18 and trained at the Royal Naval College at Greenwich.

She was soon promoted to 3rd Officer and based (among other places) at HMS Collingwood in Hampshire.

On June 6th (which happened to be Marion's birthday), she lost her fiancé who was a 41st Commando involved in the Normandy landings. He was killed at Sword Beach.

Marion returned to her pre-war job and later married and had a family, while remaining very involved in the charitable causes including the Royal Marines Association and the WRNS.