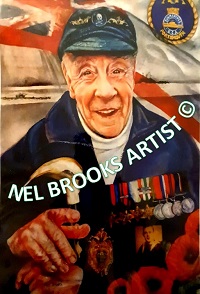 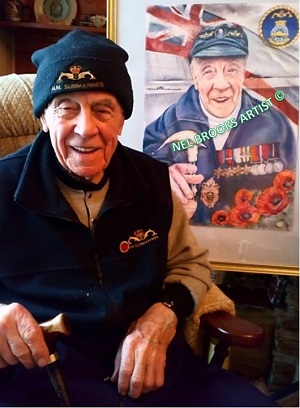 Les comes from a proud Royal Navy family with his father and uncle, who both served on HMS Hood.

Les credits the very harsh training as a 17 year old seaman at HMS Ganges (a training establishment in Suffolk) with setting him up to survive all the war threw at him.

Once trained, Les was asssigned to HMS Canterbury, which sailed along with a large flotilla to Singapore. This was to be the only ship to have a mutiny in the war! It was while sailing to Singapore (to deliver troops), while in dock at Durban, that several of the men mutinied due to what they described as 'atrocious living conditions and the state of the ship'! Les was not among the mutineers! He continued on to Singapore where the Canterbury came under heavy fire as the Japanese invaded. He often, jokingly tells people about his lucky escape from the Japanese. However, reading his full account of the experience, and the combat they encountered (at such a young age) in fact brought tears to my eyes!

Les then served on HMS Warspite after his experiences in Singapore on HMS Canterbury and prior to him becoming a sub-mariner. The Warspite was a Royal Navy battleship with 15 inch guns, which supported the Battle of Salerno (Italy). He talks of how (with their 1 Tonne bombs, filled with thousands of ball bearings) tey caused so much damage that the enemy sent bombers to obliterate the Warspite! Although they took several direct hits (one down the funnel of the ship, which killed several of the men in the engine room), the enemy could not sink her!

The records stands that 4 ocean-going tugs dragged her back to Malta, where she underwent essential repairs so she oculd be towed on to Gibraltar. There, she was fitted out in time to assist in Operation Overlord (Normandy D-Day Landings).

At the end of the war, the Warspite was due to be towed to the breakers yard. However, she didn't go willingly and instead ran aground on the rocks at Mount's Bay Cornwall!

After the Warspite went into Gibralta for a re-fit, Les left the ship and went on to re-train as a sub-mariner. He served on several 'boats' inclduing with the Dutch Navy in the North Atlantic. He is the only sub-mariner that he is aware of, who is entitled to wear both the Royal Navy and Dutch Royal Navy Dolphins.

He later became the President of the Portsmouth Submariners Association for 2014, 2015 and 2016 and is also a highly accomplished artist having created several excellent war art pieces.