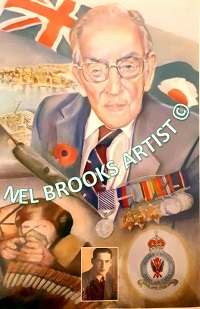 John volunteered for the RAF, that is to say he was 'shoved' forward (literally) by a pal when they asked for volunteer aircrew!

He trained in the UK at sevveral locations and was eventually assigned to Bomber Command as a Wellington Front Gunner and Wireless man. He flew many missions in Germany and Malta. He said Malta was his biggest achievement.

John won the Distinguished Flying Medal, which he received from King George VI himself, at Buckingham Palace. He was mentioned in dispatches, twice.