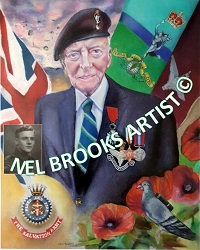 Harry took part in the Paratroopers' drop behind enemy lines on D-day, before dawn on the 6th June. Harry and many of his comrades landed far from their planned landing site and encountered 'intentiinally' flooded trenches (many of them perrishing).

Only by cutting loose his heavy radio which was attached to his leg, was he able to survive.

After the war Harry served as Commissioner of The Salvation Army at various locations internationally.