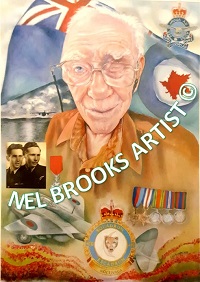 Francis was born in New York to English parents. When war broke out in Europe, Francis was desperate to volunteer but was turned away as he was too young.

Upon his 18th birthday, Francis took a train to Canada and joined the Royal Canadian Air Force (which obligated him to relinquish US Citizenship).

As Francis pointed out, plenty of young men were capable of becoming pilots but only a few had the skills necessary to become a navigator (they calculated everything without the use of calculators or computers!).

Francis was teamed up with a French-Canadian pilot called Jacques and they flew Mosquito Night Fighters over Europe based in the UK.

Francis has a strong religious faith and defies anyone who flew over the skies of Europe in wartime conditions not to believe in God.

After the war, Francis settled in the UK, where he married and had a family.