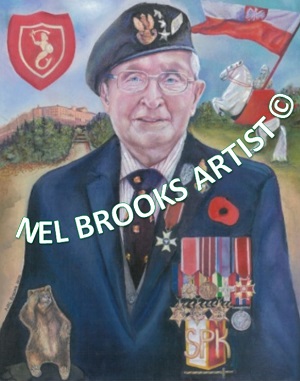 Edmund was 16 years old in 1939 and was at his local high school in Poland when the Russians invaded. He was interrogated and because his father had been a high ranking officer in Poland's White Army, Edmund was evacuated to a camp in Kiev and placed with a Russian family.

When the Germans invaded, they moved him back to Volga where the Russians starved him and other prisoners to get them to fight for them. However, Edmund joined General Anders' 2nd Polish Army Corps.

They travelled through Persia, coming across a Brown Bear cub, which they adopted and called Wojtek.

Eventually, they joined the British 8th Army, going through North Africa and then on to Monti Cassino. Woljek the bear was enlisted as a Private in order to allow him to travel to Italy and he had his own rations, smoked and drank beer and even helped carry amunition during the battle! Edmund's 2nd Army are credited for taking The monastery, but allied casualties were huge (greater than all allied casualties on D-day alone).

After the war, Edmund (whose country was carved up and given partly to Russia and Germany) never got to go home again nor see his Mother. He moved to England as did many Polish war veterans and he started working (among other places) in an apple orchard for a cider company. He later married.

In Edmund' s portrait, there is the legendary Hussar white knight, which symbolises the Polish strength in battle. Wojtek also appears in the bottom left corner! Edmund had many more medals than are depicted in the portrait and is a proud and honorable man, who has survived the most challenging experiences the human spirit can endure.