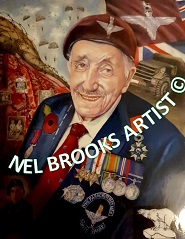 Arthur served with the renowned 49th Infantry Division (Polar Bears). The Polar Bears were a fierce combat group rumoured to 'take no prisoners'.

Whilst waiting at Southampton Common to embark for D-Day, Arthur lost his group of men and when he landed on Gold Beach in Normany on D-Day, it took him several days to be re-united with his Division! During this time, Arthur commandeered a German vehicle, which made it back to Blighty and is now occasionally displayed in museums.

Arthur took part in the liberation of Holland and Belgium (Operation Market Garden). He said:

"Arnhem will go down as one of the great battles of history, like Waterloo. The fighting was very fierce. We were outnumbered seven to one, 70,000 Germans against 10,000 of us, and we lost about 8,000 killed, wounded and captured. We need to remember Arnhem".

Arthur began as a Polar Bear and subsequently trained as a paratrooper and became part of the 10th Parachute Regiment.